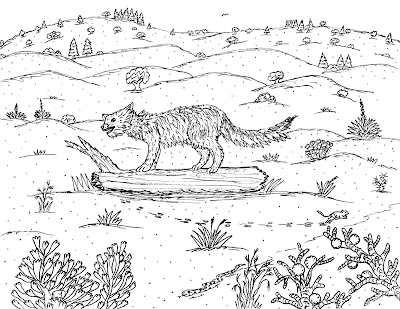 Coral Pink Sand Dunes Plants and Animals 2
This is a Common Gray Fox , a Kangaroo Rat, and a Gopher Snake with Desert Plants

This is the second drawing of the plants and animals of Coral Pink Sand Dunes.  The central figure in this drawing is the Common Gray Fox.  This predator can range from 30-44 inches,  That is 76-112 cm.  They live in much of North America . . . clear down to and in Central America.  Unlike a red fox these foxes are black, grey, and white.  The Gray Fox preys on small animals, but it is unique in that it can and does climb trees to escape from bigger predators and to find small prey in trees. . . like birds and squirrels.  The Common Gray Fox can climb trees up to  60 feet  or  18 meters tall.  They climb down backwards or they hop from branch to branch to get down.  This fox has long sharp claws that they use to climb trees.  It should be pointed out the the Gray Foxes at Coral Pink Sand Dunes don't have any trees 60 feet tall to climb.  There ARE juniper, pine, and fir trees there but, they are not near that tall.

The small rodent hopping across the drawing is a Kangaroo Rat.  They are small rodents that live in the Desert Southwest.  They live without hardly ever if ever drinking water.  They get all the water they need from the seeds they eat.  Kangaroo rats are amazing animals.  Even though they are so small they can jump up to 9 feet or 2.75 meters in one jump.

The snake is a Gopher Snake.  They are among the largest and most common snakes in North America.  They are not venous but they do prey on smaller animals like rodents, frogs, and toads.  I was bit by a Gopher Snake when I was a boy and it hurt like crazy but the wound healed up fine.
People often mistake the Gopher Snake for a rattlesnake.  But a Gopher Snake is far less dangerous.

The Golden  Eagle IS in the drawing.  It is flying high far off in the distance.  I once came across a Golden Eagle on a rural highway in Western Utah.  It was sitting or standing in the middle of the road eating roadkill.  These animals are magnificent.  They have a wingspan of 78 inches.  That would be nearly 2 meters.  They can be around a yard or a about a meter long, yet they weigh only 14 lbs or 6.35 kg.  Now, on to the plants....

The plants are all desert plants, although one of the species is an invasive species.  It can be seen up front and in a couple of other places in the drawing.  It is called Cheatgrass.  It came to America on the boots of some pioneer from Europe or Asia.... or maybe as part of contaminated straw packing in items shipped from Europe or Asia.  This happened in the mid 1800s.   Cheatgrass is very aggressive and can often out compete other native grasses.  It grows so abundantly in the Western USA that it can carry lightning caused fires to spread very quickly.  This is a problem because we have lost a lot of native plants, like sage brush to fire.  Before Cheatgrass a bolt of lightning might hit a Juniper tree or a Sage Brush.  This led to one plant dying.  Now, with Cheatgrass, there are whole areas of many acres that get burned due to one lightning strike because of the Cheatgrass carrying the fire from native plant to native plant.  Cheatgrass has the multipronged head that come off in your stockings and drove me crazy as a kid growing up in the Western Utah Desert.   It drys out in late spring or very early summer and so it is dry and yellowish gold and ready to burn very early in the fire season.

The plant you see part of on the right in the foreground is Utah Juniper or Juniperus ostesperma.   On mountain slopes you often see another type of juniper tree called Rocky Mountain Juniper with a scientific name of Juniperus scopulorum.  All juniper trees or bushes have scale-like leaves and a hard gray-blue berry.  It is common to see a native juniper bush planted around homes and businesses in the Rocky Mountain West.  It is called Spreading Juniper or Juniperus horizontalis.

There are a few Yucca plants to be seen in the drawing as well.  It is called Kanab Yucca or Yucca kanabensis.  This is a desert plant that is called a succulent because it is capable of storing water in its thick leaves.  It has towering seed pods that rise from the middle of the plant. My wife was once bucked off a horse and had a very painful landing on a yucca plant.

The following photos are from the Coral Pink Sand Dunes.  Some are from the displays in their small but excellent visitor's center.  .  . 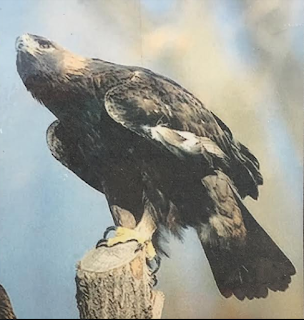 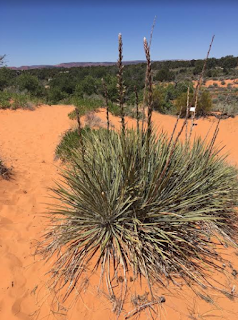 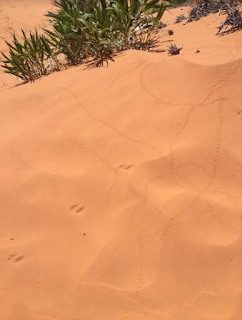 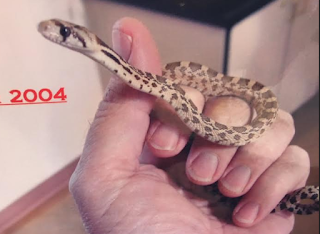